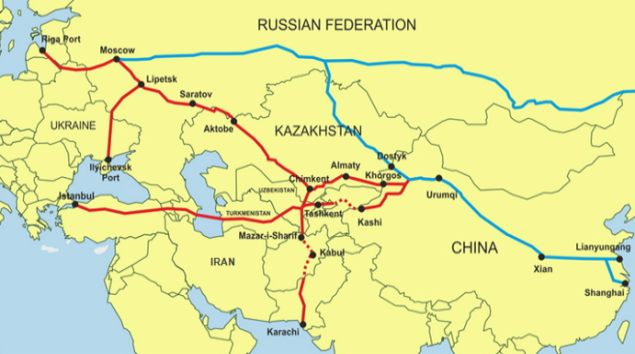 U.S. and E.U. Trade sanctions against Iran, together with developments in transport infrastructure in the Middle East are boosting trade relations with Iranian neighbours closer to home.  Recently, Kazakhstan’s “multi-vector” foreign policy is, according to Silk Road Reporters, offering greater opportunities for Iranian businesses equipped to handle international project management to forge closer trade relations with its southern Caspian neighbour.  Bordering the Caspian Sea to the north east, Kazakhstan increasingly places a high priority on good relations with its maritime neighbours, including Iran on the southern coast.

In 2013, bilateral trade between Kazakhstan and Iran amounted to $620 million, marginally lower than 2012, but nevertheless the Iranian Customs Administration put Kazakhstan in 18th position as a trading partner.

Teheran is keen to develop new import and export opportunities with Middle Eastern neighbours, including Kazakh partners. In May representatives of the two nations met to discuss closer trading ties at the 4th ECO Ministerial Meeting on Finance and Economy in Astana, Kazakhstan’s capital.

The Iranian Finance and Economic Affairs Minister, Ali Tayyebnia, told the Kazakh Prime Minister, Karim Massimov, that Iran and Kazakhstan could potentially increase bilateral trade between the two countries to $5 billion.  This was in line with opinions expressed by the Iranian President, Hassan Rouhani, who favoured further import and export cooperation with neighbours in the Caspian.  In particular, he said, Kazakhstan shares Iranian interests in shipping, environmental protection and the tourism industry.

Iranian-Kazakh trade relations are experiencing historic highs, boosted with President Rouhani’s first state visit to Kazakhstan in September for the Astana business forum.  Opening the forum, the Kazakh President, Nursultan Nazarbayev, made favourable remarks about its burgeoning relationship with Iran:

“Iran is one of the most important economic partners of Kazakhstan in the Middle East. However, bilateral trade in recent years, due to the situation in the global economy and in Europe, has fallen. But, according to the first half of 2014, trade is growing and we expect that it will reach $1 billion. Next year, we expect that the new Kazakh-Turkmen section of Bereket-Gorgan railway, a connecting node between Central Asia and the Persian Gulf, will increase the trade turnover between the two states to $2 billion.”

President Nazarbayev went on to say at a news conference held at the business development event that: “Kazakhstan sees the Islamic Republic of Iran as an important partner in the world and a good neighbor in the Caspian Sea region.”

The forum was a real success for those businesses in the region wishing to build their imports and exports abroad in a variety of industries.  Around 250 delegates from around 200 companies, evenly split between the two countries attended the Iran-Kazakh business forum. A number of trade arrangements were agreed. In particular, the Kazakh Ministry of Investment and Development reported $500 million worth of bilateral trade agreements were concluded in a number of sectors, including: geology, metals, agriculture, transport, logistics, tourism and building materials manufacturing.

Agreed contracts included the construction of a hydrometallurgical plant, the development of copper mining deposits and on building a grain terminal for Kazakh agricultural exports to Iran’s north-eastern Golestan province.  There was also a memorandum of understanding achieved on the production of the building material, travertine.  Partnership in foreign direct investment (FDI) is another potential shared area of interest between the two nations, offering fantastic opportunities for Iranian businesses, such as the White Rose Group, with expertise in international project management.

Rouhani expressed an intention “…to gradually increase the volume of Tehran-Astana trade exchanges by up to five times. The two countries will increase their cooperation in different areas…” In particular, he cited: energy, transportation, Caspian Sea shipping, joint ventures, the environment, culture, science and technology.

Rouhani also acknowledged the significance for increases in trade via the Kazakhstan-Turkmenistan-Iran railway, a 677km long railway line, connecting Kazakhstan and Turkmenistan with Iran and the Persian Gulf.  It links Uzen in Kazakhstan with Bereket - Etrek in Turkmenistan and ends at Gorgan in Iran's Golestan province. The railway is currently being linked to the national network through to the Persian Gulf and is due for inauguration next month.

“Kazakhstan can transit around five million tons of its export commodities to Iran’s southern ports per year once the new Kazakhstan-Turkmenistan-Iran railway starts operation”, Rouhani commented.  This, however, was only half of the figure cited by Nazarbayev as a possibility.

For Iran, the railway network also opens new opportunities for increased exports and imports with Russia and China via Kazakhstan.  Iran will be able to profit from the Western Europe- Western China transport corridor.

Significantly, President Nazarbayev also proposed a ‘Kazakh-Iranian trade house’ which could facilitate expansion of bilateral trade and economic cooperation between Iran and Kazakhstan.

On August 12 Nazarbayev suggested that an agreement will be reached on Iran’s nuclear program in the near future, which could be of mutual benefit.  He told the press: “A speedy solution to the situation around the Iranian nuclear program is important for tranquillity in the region. We have contributed to this process, holding two rounds of talks between the six intermediaries and Iran in Almaty. We believe that a long-term agreement, which will satisfy all parties, will be concluded in the near future.”

Diplomatic relations between the two nations have been partially driven by U.S. and E.U. trade sanctions against Iran.  According to Iranian Ambassador Mojtaba Damirchilu, “Kazakhstan has a special place in Iran’s foreign policy. Strengthening cooperation is a priority for the leadership of the country.”  He noted that President Hassan Rouhani’s first visit to Kazakhstan illustrated strengthening of bilateral relations between the two nations.

Iran-Kazakh developments are mutually beneficial: Kazakhstan offers some mitigation against any further Western sanctions related to Iran’s nuclear program, plus it is a way into potential new markets amongst post-Soviet bloc nations.

Iran, in turn, offers greater export and import access to the land-locked Kazakhstan. The Kazakhstan-Turkmenistan-Iran railway is a vital element of its transport strategy, but use of Iran’s shorelines, on both the Caspian and Persian Gulf, including the port of Bandar Abbas, open up new opportunities for much wanted new trade partners.  Kazakhstan’s Minister of Economy and Budget Planning Yerbolat Dossayev said earlier this year: “…the Islamic Republic of Iran provides (Kazakhstan)  with the best and safest route to international waters.”

The White Rose Group recommend readers watch this space for updates and the latest news on warming international relations in the Middle East which are providing import – export opportunities in the Middle Eastern region. We can help with any logistics, project planning and management challenges and questions you may have for maximising the regional trading opportunities opening up with Iran.  Leave us your questions on our contact page and we will be in touch within the day. Alternatively, feel free to leave us comments about any of the subjects covered here.

Thanks to Dr. John C. K. Daly is a non-resident Fellow at the Johns Hopkins Central Asia Caucasus Institute in Washington DC, writing for Silk Road Reporters for material for this article.