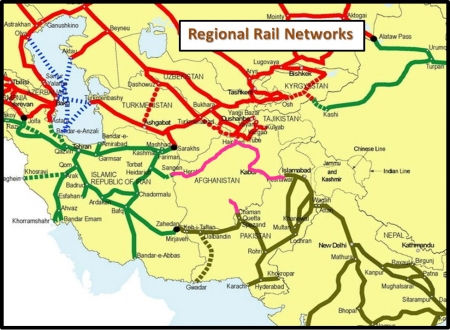 Trade sanctions with Iran have been creating some regional opportunities for international freight services in the Middle East region in recent years.  The White Rose Group has recently reported on Iran’s discussions on trade with Russia and Azerbaijan, in particular.  However, the region’s freight forwarding is still somewhat hampered by the need to develop better transportation infrastructure between burgeoning allies.

Railway infrastructure is currently being improved between Russia and Iran.  This suits both partners who are currently subject to sanctions from Western nations.  Azerbaijan is a vital strategic partner for both, providing a potential through rail link to the west of the Caspian Sea.  President Hassan Rouhani is expected to return Azerbaijani President Ilham Aliyev’s visit to Iran earlier this year sometime soon, at which time, Iranian delegation are likely to progress detailed cross border trade discussions.

Meantime the foundations for discussions were recently announced by the Russian State Railroads Company regarding plans to build a railway link from Russia, across Azerbaijan, to Iran; the Russian company is funding the project, potentially opening doors for Iranian businesses skilled in international project management. A three party agreement on building the railway is expected to be signed in July next year.

Azerbaijan is keen to develop its transport infrastructure to support international freight forwarding. The President of the Republic of Azerbaijan, Ilham Aliyev has stated that this is a strategic priority for the country. 2015 will see the inauguration of the Baku-Tbilisi-Kars railway from Azerbaijan to Turkey via Georgia. This has the potential to carry five million tons of cargo and one million people each year.

Azerbaijan shares an ambivalent relationship to Western neighbours; it offers energy and assistance for NATO in Afghanistan, but is also condemned for abuses of civil rights.  There has been voices raised in the European Parliament to impose sanctions on Azerbaijan for its civil rights issues.  In this sense, Iran and Russia offer smoother trading relationships.

At the time or writing, the Organisation For Security and Co-operation in Europe (OSCE) has imposed an arms embargo on Azerbaijan.

Officials in Russia and Iran have discussed options for simplifying land and sea transportation links. Freight shipping between the two is gathering pace, but the Azerbaijani railway corridor will boost cross-border freight forwarding according to the Chair for the Russian Parliamentary Committee for Transportation, Yevgeny Moskvichyev.

Whilst Azerbaijan and Iran have not always seen eye to eye on territorial matters and foreign policy, recently, Baku has apparently been making significant efforts to build better relations with Tehran and Iran has proposed joint ventures in relation to car manufacture.

Whilst relations between the three can occasionally be fractious, each may need each other more than ever right now in light of recent slides in the Russian Rouble, failed resolution of discussions of sanctions against Iran and Azerbaijani aspirations for economic growth.

The White Rose Group would be interested to hear from international project management and freight forwarding companies in the region about why there is a need for better rail transport and freight shipping links.  Please leave us your comments.