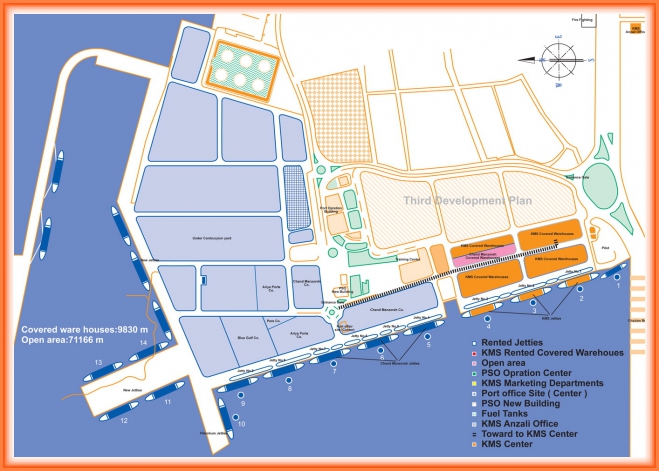 The news of Iran’s increasingly outward looking attitude to boosting regional Iranian trade ties and keeping up with infrastructure improvements continues apace, with the latest details of logistics from Trend reporter, Umid Niayesh that Iran is giving greater focus to the “Caspian littoral countries via Anzali port in the country's northern Gilan province”.

The Deputy Governor of this province is, it seems, capitalising upon recent trade negotiations reported elsewhere at the White Rose Group.  According to Iran’s IRNA news agency earlier this year, Mohammad Hossein Asgharian wants to make the most of capacity for freight shipping.  He and officials from Gilan Province met with Iranian exporters on April 15, when his remarks were broadcast.

Plans are in motion to improve international transportation capacity in the Gilan Province.  For instance, the Qazvin-Rasht-Anzali railway. Asgharian spoke about the construction of a new shipping container port in the Caspian Sea as well as further development of the port of Anzali.  These are among a number of the administration's plans for boosting the province's international freight forwarding capacity.

The Director General of Gilan province’s ports, Farhad Montaser Kouhsar announced that harbour freight of Anzali could increase from 10 million tons per year to 17 million tons.

The potential for air freight capacity in Gilan province was also emphasised at the April meeting by Iranian MP Hassan Khasteband.  This would be the final cog in place to maximise import and export opportunities the Caspian Sea littoral countries and would be great news for businesses who are involved in project planning and management such as the White Rose Group.

Economic benefits, such as increases in jobs and business investment could be felt more widely in the province if all of the developments under discussion and implementation are moved forward.  In particular, the Anzali Free Trade-Industrial Zone located in International North-South Transport Corridor (INSTC) provides unique opportunities for the Gilan Province to flourish in the future.  This INSTC joins the Indian Ocean and Persian Gulf to the Caspian Sea through Iran and then reaches to St. Petersburg and North Europe via Russia.  The Anzali Free Zone brings together industrial, trade and commercial, tourism and services.

This meeting where the above developments were discussed, together with other talks held by Iranian officials and President Rouhani throughout 2014, reported by the White Rose Group, means that identifying investment finance for Gilan would also be good news for Iran’s regional trade partners who would also benefit from Iran’s planned developments in the INSTC.  Potential international trade partners of Iran who stand to profit include: Russia and India, Azerbaijan, Armenia, Kazakhstan, Kyrgyzstan, Tajikistan, Turkey, Ukraine, Belarus, Oman, Syria and Bulgaria.

According to Iranian officials in attendance at the meeting with the province’s administration, most trade exchanges from Anzali Free Trade Zone were made by Caucasian, East European, Latin American and North American countries as well as those regional Iranian trade partners bordering the Gulf and the Caspian Sea.

Given the upward trend in Iranian exports until the year ending  March 20, 2013,  (Iranian calendar year of 1391) from Anzali Free Trade Zone, there is likely to be returns on the value of international transportation which go way beyond the value of $142 million recorded previous to sanctions against Iran having an impact.

Now Rouhani’s outward looking approach to international relations is bearing fruit in the region, Iran looks set to be on the cusp of a new phase in economic development in spite of sanctions.  The White Rose Group hopes that on-going discussions with the West on this issue will bear fruit early next year and so wish our readers celebrating at this time of year all the very best.  We look forward to a prosperous 2015 with all of our clients.