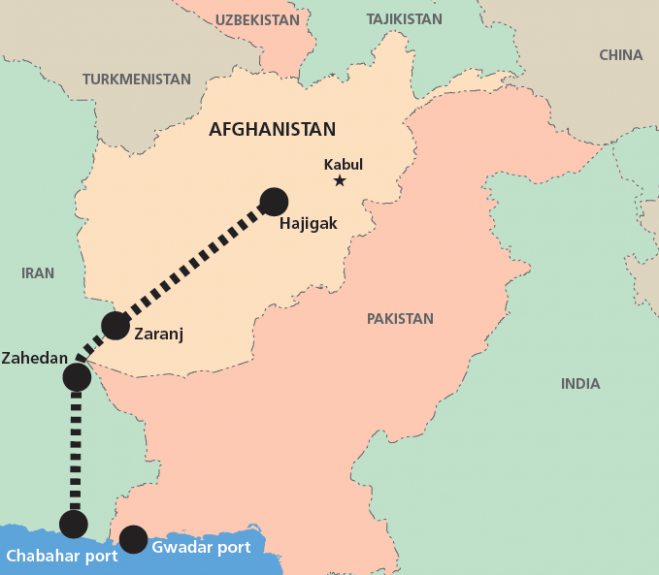 White Rose Group are looking forward to stepping shipping freight projects up a gear in the coming months with more demand for international project management services being focussed around Chabahar, where they have offices.  Before long, we expect a positive outcome to talks with the west too which will bring an end to a long haul of sanctions against Iran and together with Chabahar Port developments finally nearing completion, 2015 promises to be a great year for the company and our business partners and clients.

The Times of India recently talked about a trilateral international transportation agreement between Afghanistan, India and Iran to be finalised on completion of the Chabahar port infrastructure project.  India have invested deeply, as we have reported previously in our news updates, because they want to cut reliance on Pakistan for transportation logistics in furthering trade with Afghanistan. Last year, India proffered a $100mn investment in international container shipping capacity in Chabahar.

The final details are being ironed out in readiness for the three nations to sign in Tehran imminently. The new Iranian capacity for harbor freight is expected to provide a much needed injection into Afghanistan’s growth, as volume value steams ahead from “…$700mn to billions of dollars," according to Afghanistan’s Ambassador to India, Shaida Mohammad Abdali.

Formerly, Afghanistan relied on Pakistan’s ports at Gwadar and Karachi port; Chabahar is 1000km closer than Karachi, cutting shipping freight time and costs.  Also over ground shipping to Afghanistan was disbarred to India by Pakistan.

Afghanistan will also be granting visa-on-arrival for Indian business owners who want to do business in Afghanistan, meaning red tape will not be a barrier for cross border transactions between the two nations.

Business people concerned about on-going instability in Afghanistan can take some reassurance that  10,000 American troops remain in the country until next year, with the possibility of this security arrangement being renewed until there is stability. Abdali, speaking in Bhopal recently said: "ISIS is competing with Al Qaeda affiliates in Afghanistan. But our nation won't collapse. The terrorists hit and run and regroup, but they are no longer a big threat."

"We are ready to welcome Afghan trucks at the ICP Attari. We are also prepared to join the successor agreement to Afghan Pakistan Trade and Transit Agreement. This will re-establish one of the oldest trading routes of South Asia. I also reaffirmed my commitment to take the Chahbahar Port project in Iran forward. We will also quickly conclude a bilateral Motor Vehicles Agreement," he said.

India’s Union Shipping Minister Nitin Gadkari is in Tehran any day to finalize the tripartite agreement.  India will meantime lobby the US to waive sanctions in relation to harbor freight at Chabahar.  This will tie in with the technical negotiations around comprehensive agreement on the Iranian nuclear energy program between Iran and P5+1 which are expected to be finally concluded in the next month or two. The signs here have been looking good lately, so India may well succeed in their bid to maximise import and export business opportunities at the port.

“Once the [final Iran] deal is signed, the Indian government will invest $85 million for the purchase of equipment needed to set up and run a container terminal and a multi-purpose berth at the Chabahar port,” the Modi statement said. “Further, an annual expenditure of $22.9 million will be incurred by the [Indian] government for operating the port”.

Chabahar is perfectly situated on the confluence of the Indian Ocean and the Sea of Oman in south eastern Iran.  This is India’s first foray into investments into foreign port and harbor freight projects. It is key to India’s security interests to establish a viable sea-land route into Afghanistan.  India views the port not only as a gateway to Afghanistan, however, but also to Central Asia and beyond.

To facilitate over-land freight shipping, New Delhi has spoken of plans to build a road-railroad network from Chabahar to Milak in Iran. This will link with the 223-km Zaranj-Delaram road in Afghanistan, also funded by India.

This week, Prime Minister Narendra Modi and President Ashraf Ghani will be meeting to discuss wider issues of mutual interest.  Iran too has common interests with both trade partners, not least

the tripartite freight management and logistics details for the transit agreement in relation to Chabahar Port.

If you have any questions about the logistics of international project management with Afghanistan and India, please get in touch. With over ten years in the field and a wealth of business partners across various industries, we are confident of finding freight management solutions to suit your business needs. We also have expertise in construction and other industries.  Check out our full range services to find out more.