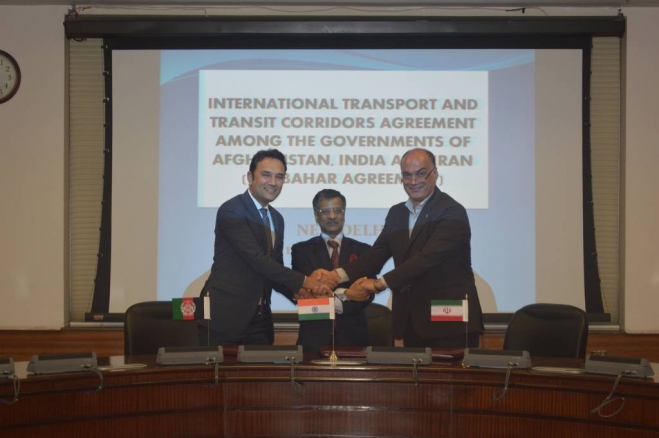 India and Iran see their partnership in this project as key to connecting the entire region and beyond to Russia and China, with the simultaneously developing rail freight links we recently have been reporting on.

Iran and India initially agreed to jointly develop Chabahar Port near Iran's border with Pakistan as far back as 2003.  Being in the southeast of the country, this served India’s needs to by-pass neighbouring Pakistan, thus avoiding potential conflicts when exporting to Afghanistan and central Asia.  Pakistan does not allow Indian road or rail freight transport to Afghanistan; in fact only recently has Afghanistan been allowed to export to India across its territory.

The relieving of sanctions against Iran means that progress on the Chabahar project has got to this point.  In February, the Indian government opened credit to the value of 150 million dollars and formed a company in Iran to handle the project, the first arrangement of its kind for India, which speaks volumes about the value Indian ministers have for their partnership with Iran.  Prime Minister Narendra Modi, who has already demonstrated his commitment to this project may visit Tehran again in the near future too.

Chabahar is about to become a regional transportation and logistics hub through which all trade routes from India to the region will run.  Chabahar is a Free Trade and Industrial Zone, which gives the city real significance in handling overseas trade, the industry the White Rose Group is at the heart of, having offices here.

2.5 million tonnes of goods per year are expected to pass through the port, creating thousands of jobs in the region, a prospect insiders have been anticipating for 13 years since the original proposal was made.

The three partner countries have completed negotiating the text of the trilateral transportation and transit pact on April 11th, setting the legal framework in place for Iranian companies and their Afghani and Indian counterparts to build trade relationships.

Afghanistan’s ambassador to India, Shaida Abdali said: “This is a very, very crucial agreement for Afghanistan. The opening of this corridor will help us to fully reach our potential, give us a new trade route. This is a completely new chapter”.

Iranian, Indian and Afghanistan negotiators took the whole day working on final details of the agreement, finally shaking hands 9.30pm at night, having overcome sticky visa issues; this was the second meeting since experts began negotiations in Tehran last September. The final signatures are set to take place in Iran, possibly within the next month, according to Abdali, which is likely to happen during Narendra Modi’s visit.

Why The Chabahar Agreement Is Important

This momentous agreement covers the trade and transport corridors linking the major Indian port of Mumbai to Chabahar and Afghanistan, via Zahedan, the capital city of Sistan and Baluchestan Province.   The specific routes will be decided later.

India and Iran first discussed options for Chabahar in 2002, but Afghanistan did not become involved until 2003. In 2004, Ashok Leyland Project services and two state-owned railway companies formed a consortium to plan construction of rail links connecting to the port, but this arrangement came to nothing. Progress really came with the setting up of the current trilateral working group in 2012 and the nuclear discussions subsequent to this.

When these discussions with the P5+1 were achieving results, India’s shipping minister, Nitin Gadkari, visited Iran in May 2015 and signed an $85 million deal to lease two berths in Chabahar Port, for use as shipping container and cargo terminals. This too had obstacles to overcome, however, when after the MoU signed in 2014, it came out that the port was already leased to a private firm, Arya Bandar. As a result, progress was once more stalled, with the drawing up of a new contract.

Meanwhile, as part of wider strategic infrastructure developments, India completed the 215-kilometre Delaram-Zaranj Highway  in 2009.  This offers an important trade route between Iran and the rest of Asia.

This also gave the formerly land-locked Afghanistan an outlet to a sea port.  Route 606, as it is also known, or A71, runs 218 km through the Nimruz Province in Afghanistan and connects the Delaram District in Afghanistan to the northern border of Iran; it also runs south near Zaranj and is one of the busiest roads in Afghanistan.

The contract between Iran’s Arya Bander and India Ports Global Private Limited, a subsidiary of the Kandla and Jawaharlal Nehru Port Trust, was finalised and signed during the Maritime India summit. The Indian cabinet also approved $150 million of credit specifically to develop Chabahar.

The Indian Minister of State for petroleum and gas, Dharmendra Pradhan came to Iran during April where $20 billion of Chabahar investment was discussed with his Iranian counterpart Bijan Zangeneh.  He visited the Chabahar free trade zone and port and expressed interest in setting up an Liquid Natural Gas (LPG) plant and as well as importing LPG from Iran, companies from both countries may set up an extraction plant in Chabahar in future.

India  also asked for sufficient designated land in the Chabahar Special Economic Zone (SEZ), for their state-run Oil and Natural Gas Corp (ONGC).  This could evolve as a joint venture between Indian and Iranian public sector companies or with private sector partners, according to Tehran.

The first visit by an Indian minister to Iran since sanctions were eased, Pradhan and his delegation discussed Chabahar’s export and import facilities and also potential incentives for Indian companies.  Whether such incentives are extended to Afghanistan remains to be seen, given their not having direct investment in the port.  However, Iran could benefit from increased through flow of goods.  In 2014-15, India-Afghanistan trade stood at $684 million, which has the potential to dramatically increase in the near future.  Iranian companies such as the White Rose Group may be able to facilitate such deals with brokerage and logistics services. Given our perfect situation, we are looking forward to the tide of business coming in from our new partners in India, Afghanistan and beyond.