Trade With Iran Getting Going With New Trade Deals 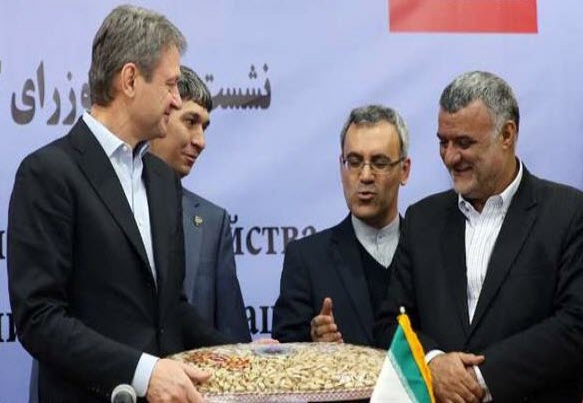 “Customs cleared” is now to be declared faster when Iranian companies are doing business with Russia as of this month according to Russian news agency Tass.  This marks another significant step forward for Iranian companies to build business opportunities with this powerhouse.

The two close allies are signing an agreement in Iran this month to open a ‘green customs corridor’, according to Russia’s Federal Customs Service Chief Andrei Belyaninov who declared this progress on cross border trade in a statement at a conference on administration in the free economic zone in Crimea. In return, Iran will prioritise Russia in any industry it wants to invest in.

The Russian Customs Chief also said that Iran promised to “replace the whole of Turkey in the deliveries of perishable goods to Russia." he said.

The customs green corridor transportation and logistics will simplify customs procedures and formalities for customs clearance and documentation and dramatically cut costs for businesses, as well as cut down on schedules.

Russia’s Energy Minister, Alexander Novak, who is co-chairman of the joint trade working group said that Iran could supply fruit and vegetables worth upwards of $1 billion to Russia each year. The ports of Makhachkala and Astrakhan are ready to receive Iranian exports and Chabahar could be the connecting port in future.

Iranian companies operating in the food industry are likely to be exporting pistachio nuts, dates, grapes, dried fruits, vegetables and other foodstuffs to food-chains in Russia. Iran grows a variety of fruit cultivars, including walnuts, figs, apples, apricots, pomegranates, muskmelons, limes, and grapes, which could also see a boost in production if Russian demand increased. This increase in Iranian exports will replace Turkish foodstuffs, now banned by Russia and could expand to other countries.

In turn, exports from Iran to Russia totalled 0.7% of Russia’s total agricultural and food imports in 2015, valued at $194.3 million.  The two partners also trade in modest volumes of meat and dairy products, but this could benefit from the latest agreements.

With improving transportation infrastructure in the region and increasing ties between the two trade partners, this is likely to dramatically increase. Makhachkala is the only ice free port in the region, so is likely to be the Russian hub to forward on freight to other areas of the country.

Russian Deputy Agriculture Minister, Sergei Levin conducted a joint tour of the Russian Republic of Dagestan with Iranian Agriculture Minister Mahmoud Hojjati in April to explore logistics and iron out any wrinkles to arrangements.  Levin commented that he expected arrangements to reduce delivery times involved for Iranian companies trading with Russia as well as increase volumes and legalise current deliveries.

In spite of the easing of sanctions against Iran creating new opportunities with partners such as India, Russia and China, the country is also looking at new import and export business opportunities via the Eurasia Economic Union (EEU).   Mojtaba Khosrow-Taj and EEU Trade Minister Veronica Nikishina in Moscow discussed related issues recently, particularly options to format a joint working group to study Iran-EEU free trade and preparation of a free trade agreement facilitating co-operative customs regulations. Tehran hopes that the foundations for smoothing joint trading will be put in place by some time in June.

Khosrow-Taj was in Moscow for a major exhibition on potential for trade with Iran. potentials.  He called on the Union to use Iran’s trade capacity. We echo Mr Khosrow-Taj’s objectives.

The EEU initially signalled the go-ahead to sign a free trade agreement with Iran last Spring.  This was confirmed with the approval of a proposal to this effect by all members of the Union in a meeting in the Armenian capital, Yerevan.

The EEU is an economic union of former Soviet states led by Russia, uniting it with Belarus, Armenia, Kazakhstan and Kyrgyzstan. It guarantees free transit of goods, services, capital and workers among members.  This organisation currently covers 170 million people and has a combined GDP of $2.7 trillion.  In operation since 1 January 2015, this trading bloc is considered by economic analysts as a major economic force which could challenge the power of the European Union and the US in the future.

Diversification is The Key To Sustainability

Whilst Iran is a globally significant exporter in the energy sector, the country is still seeking to diversify its sources of economic power.  The food industry is being looked to as offering opportunities for more rural and family run businesses to link into the rapidly expanding chains of exports. Sugar cane is another potential key export, feeding the world’s sweet tooth.

As every month passes, the import and export business opportunities for Iranian companies seem to be growing, including in tourism and mining receiving investment.  So too do the countries interested in what Iran has to offer now the pressure of sanctions is lifting. France has declared an interest in Iran’s agricultural industry already and others are following in their footsteps, meaning there will be more demand to go around our producers. Russia’s green corridorjavascript:mctmp(0); and the EEU agreements signal green shoots for Iran’s growers and food exporters.