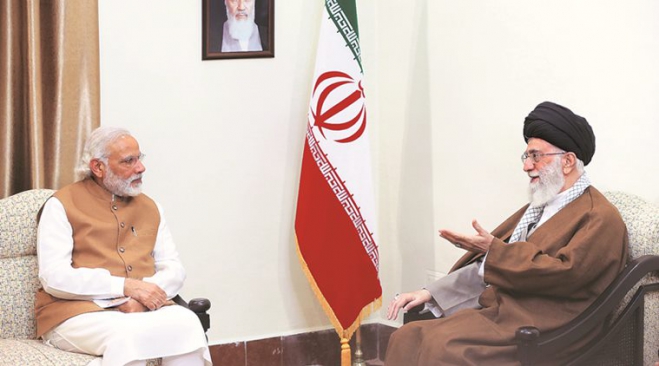 Transit via Chabahar would “boost economic growth in the region" Mr Modi said.  Mr Rouhani continued that he thought that India’s $5 million initial investment would mean that this key strategic port could “… very well turn into a very big symbol of cooperation between the two great countries of Iran and India".

According to Iran Newspaper, India views its partnership with Iranian companies and officials as an important counterbalance to China’s power in the region. .

India has an "immense need for energy" and Iran is "capable of fulfilling" India’s energy needs, the publication went on to report.

"… what this agreement does is to enable us quick movement of goods first to Iran and then onwards to Afghanistan and Russia through a new rail and road link," he told the PTI news agency.

Iran and India also signed joint co-operation agreements in the aerospace, biotechnology, nanotechnology sectors, as well as in counter-terrorism.

Despite India’s previous support for sanctions against Iran in 2009 and their reduced oil imports following, Indian companies now see renewed engagement as an business investment opportunity once more since the Geneva developments which opened Iran for business with the world once more.

Western Perceptions On Transit Via Chabahar

The U.S. do not regard transit via Chabahar or the two Asian nations’ agreement to develop the port for import and export business opportunities as a problem according to the Indian Express.

Despite some U.S. Senators expressing concern recently, Ashley Tellis of Carnegie Endowment for International Peace has been quoted by White House reporters as saying: “I do not believe that the Administration has complained in any way about the Indian investment in Chabahar.” This statement came ahead of Prime Minister Modi’ visit to America this week. He followed it up with the opinion that the U.S. was in no position to get in the way of the bilateral agreements between Iran and India, whatever differences of opinion there are.  “I think, our ability to constrain India from moving ahead of that deal is extremely low. The Indians and the Iranians have a joint interest in proving an alternative line of communication to Afghanistan and Central Asia.”,

Tellis also said that the Obama Administration is unlikely to ask India to limit its developmental activities in Afghanistan, where we recently reported on the planned Zaranj-Delaram highway transportation route.    Tellis also described “India’s interest in freedom of navigation” via sea, because he thought Modi sees India’s interests lying in building trade ties towards the South China Sea and also sea freight routes to Japan.

However, whilst the U.S. is not complaining, it seems, according to Dawn press that in Islamabad, Pakistan, two former defence secretaries claim that the sea freight route via Chabahar and associated overland connections beyond into Afghanistan are a security threat.

This week a Pakistani think tank, the Strategic Vision Institute (SVI) discussed issues of ‘National Security, Deterrence and Regional Stability in South Asia’, at which retired Lt-Gen Asif Yasin Malik said: “The alliance between India, Afghanistan and Iran is a security threat to Pakistan”.  He did not blame other countries for his own’s increasing isolation but commented:

“I see Pakistan falling into an abyss of isolation primarily because of its own mistakes and partly due to the hostile policies of other states”. He explained this as partly due to a “dysfunctional Foreign Office”, the absence of a full time foreign minister and regional and international developments.  While this may reflect opinion held in military circles, we cannot say if this also represents business owners’ position in Pakistan too.

Iran has already made moves to allay concerns about partnerships with India and Afghanistan with Pakistan’s envoy in Islamabad, Mehdi Honardoost; Pakistan and China were invited to participate in on the Chabahar agreement.

Pakistan’s Foreign Office views transit via Chabahar port positively; Adviser on Foreign Affairs, Sartaj Aziz said that Pakistan did not see Chabahar as a rival; he acknowledged that Pakistan’s Gwadar port could even develop sea freight links with Chabahar.

Of the three countries, however, he expressed confidence in Iran as most likely to consider Pakistani concerns.  Mr Lodhi also hoped that Iran’s “…interests in CPEC should be developed.”

The impression that the military is overly involved in Pakistan’s interests was expressed by Air University’s Registrar, Ghulam Mujadid, who describe “the eminence of security in national priorities”. He went on that “Pakistan needs to correct this strategic myopia. A survivalist mindset about national security dominates the political discourse and continues to be the central pillar in Pakistan’s strategic calculations.”

Such a security focused state could limit the import and export business opportunities for Iranian companies at this time, given the tensions on the ground this creates, together with a lack of effective powers for business and politicians to come together across borders to eliminate trade barriers. Mr Mujadid noted that “policies are reactive instead of being consistent and coherent”.

Given the obvious potential for a Chabahar Shipping Company, such as the White Rose Group to develop links with counterparts in Gwadar, we look forward to further Iranian discussions continuing with Pakistani leadership.