Import and Export with the European Union Slows With Brexit 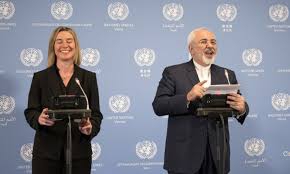 The foreign policy High Representative for the European Union, Federica Mogherini  has said to Tasnim News Agency that EU members want to become Iran's biggest trading partner once more, as they were in the past. "We are the ones that used to be Iran's first partner on the economic fields, on trade, investment and we want to be back to that". As one of the world’s greatest trading blocks and one of the richest still, it is important for Iranian companies to continue to look west for their import and export business opportunities.

Since the easing of sanctions on Iran in January, more and more European trade delegations have visited this country and political leaders recognise Iran’s capacity to become a major economic force on the world stage in future.  Since 2009 this trading bloc has continued to claw back from debt crisis and the recent decision by the British to leave Europe (the so-called ‘Brexit’), mean that businesses seeking to invest here will be looked on favourably by the remaining 27 members who represent almost 700 million people. The U.K. too will also now potentially be free to establish bilateral trade ties.

The EU, Great Britain and Iran will benefit from building trading relationships.  It seems that a former senior Iranian diplomat spoke anonymously to Al-Monitor describing trade between the EU and Iran particularly as a "necessity” for both.

Whilst sanctions against Iran continue to unravel, banks continue to hold back on deals conducted in U.S. dollars, so business deals with American companies are still problematic, making the EU a stronger option for Iranian companies seeking to expand into lucrative markets. Europe sees Iran as a strategic partner for the long term because of their energy needs. Iran's extensive oil and gas resources are a huge draw for European governments seeking to diversify their suppliers. In return, Iranians can access advanced technologies and a relatively wealthy market.

The relationship between Europe and Iran has had its share of ups and downs. The two maintained ties after the 1979 Islamic Revolutions and with the exception of the imposition of sanctions, since 1990s, relations have got better, particularly under the presidency of Mohammad Khatami. Since then there have been significant trade, academic and cultural exchanges.

This made the EU Iran's largest trade partner.  Ten years ago, a massive 38% of Iranian companies’ exports went there and just under a third of imports to Iran came from the EU.

This past decade has forced Iran to look elsewhere for new markets when the EU followed the U.S. sanctions against Iran.  Iranian banks and insurance companies had their activities constrained, which had a knock on effect on companies seeking to transact, as all financial deals at some point have to be denominated in USD; similarly goods need to be protected in transit against loss, damage or theft.  SWIFT transactions too were also put on hold.  Iranian imports from the EU fell to a low of 7.3 billion euros in 2012.

Since the Joint Comprehensive Plan of Action (JCPOA) was signed last year, visits by European industries, such as aviation, telecommunications, vehicle manufacturing, agriculture and energy mean billions more trade is back on the books.  Iranian companies and government officials have played host to a consistent trail of would be investors and Iran is truly open for business.

When Mogherini visited Tehran this spring, she specifically noted that European banks need to be present in Iran and efforts are being made to encourage them to take a positive position towards Iran. The two countries have already agreed to broaden co-operation in trade and investment, particularly in the agriculture, transport and energy sectors. Rouhani asserted before visiting Europe in January that "Expansion of ties with EU states is among Tehran's policies”.

Economic and trade officials in Tehran have estimated that Iran could easily use $50 billion in foreign investment each year and European investment could be good news for Iranian companies seeking expansion. France, Germany and Italy are expected to become key partners from the EU, but any trade with the U.K. may now have to be negotiated separately.

European banks are beginning to open their communications with Iranian banks, albeit challenges remain.  Nevertheless, as the U.S. position softens on banks with branches in the U.S., this means that bilateral ties between industries will have the means to pay for goods and services.

Meantime Iran continues to build import and export business opportunities with non-Western countries despite apparent Saudi moves to undermine benefits of the JCPOA for Iran.  A European diplomat anonymously reiterated that commercial ties are inevitable, but companies must expect for developments to happen slowly for a while.

"Ambitious Iranian projects will require the support of international investors, but European [and international] investment firms still need time to adjust their plans to the new situation and assess the new legal provisions," said the report.

As issues with Brexit begin to make themselves felt in countries of the EU who are experiencing tensions about membership, what once seemed like months of painful progression ahead may yet prove to be years before the world’s second largest trading bloc can become Iran's largest trade partner again.