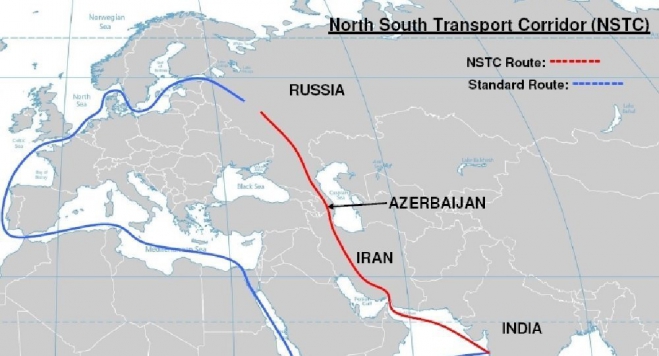 The North-South rail freight transportation route is staying on track for Azerbaijan and Iranian companies wanting to exploit new routes to foreign markets.  Since early this year, Azerbaijan Railways CJSC has laid almost 200 kilometers of railway line, according to the company’s Chairman, Javid Gurbanov.  Reported in Trend, the announcement was made recently in Baku.

Azerbaijan has needed new line construction and renovation of poor and underused rail freight routes in order to develop links northwards to Russia and south to the Persian Gulf.  Production of railway infrastructure has also been an issue, which could now speed up further expansion, investment availability depending.

Gurbanov  announced the commissioning of an “… updated production base for the construction of railways in Sangachal settlement,” on 12th October.  The aim is to complete construction of the Ganja-Baku high-speed railway in late 2017. Trains will be able to reach a speed of 100 km/h making completion of freight journey possible within 3.5-4 hours.

In the city of Astara and 8.3-kilometer railway section has been also completed; this is situated within the International North-South Transport Corridor.  All that remains is the completion of the bridge across the Astarachay River on the border of Azerbaijan and Iran.  This, said Gurbanov was now nearing completion. The commissioning of the bridge is expected mid-November and at the latest, at the end of next month.  Azerbaijani Railways Javid Gurbanov stated: "Although there were certain problems with land acquisition on the Iranian side, which will be resolved in the near future, the bridge will be commissioned in about a month.”

Freight forwarder companies and logistics companies are gearing up to handle the increased demand for rail freight cargo transportations in the region.  Governments in the central Asian region, along with Russia, India and China are seeking to connect nations in Northern Europe with Southeast Asia and everywhere between.  This offers greater options for expansion wherever local companies seek to build their presence.

The North South Corridor initial stage is planned to transport 5 million tons of cargo via this railway corridor each year and it is hoped this will increase to over 10 million tons in the future.

Apart from the international aspects of this infrastructure project, this improved railway route will significantly reduce transportation costs for companies looking for more business import and export opportunities.    The value and volume of trade between Iran and Azerbaijan is set to increase in the coming months.

All countries involved in the North-South Transport Corridor project are becoming involved in boosting  rail freight transportation according to the ADY Express company, logistics operator of Azerbaijan Railways CJSC.

ADY Express handled the initial reception, handling and shipment of three out of the first five 40-foot universal containers, marking a significant milestone in the route’s development.  The cargo containers were loaded with electrical equipment and spare parts in Azerbaijan’s Astara district and transited through to their destination for the first time.

Sent as test cargo from the Indian city of Bangalore to Vorsino station in Russia, the containers arrived safely, boosting confidence and optimism for government officials, transportation personnel and participating companies.

The containers originating in the Indian city of Mumbai, were transported as sea freight to the Iranian port of Bandar Abbas, then sent on to Astara by road trucks, according to reports.

As a result of the success of this trial run a speaker for ADI said: “One can say that already all the countries participating in the North-South Transport Corridor project have joined the cargo transportation process.”

The company also said that another cargo transport operation via the South-West corridor was undertaken. “Ten 20-foot containers with marble sent from Iran to Europe were transshipped from road transport to rail transport and sent from Azerbaijan’s Astara station”.

The South-West corridor goes from India via the Persian Gulf to Iran, onto Azerbaijan, through Georgia to Black Sea then to Europe.

This route is initially planned to transport 10,000 tons of cargo with the possibility of increasing it by significantly in the future. The south-west corridor makes it possible to reduce rail, road and sea cargo transportation from India to Europe by two or three times, which will also help companies make savings too.

The South-West transportation corridor agreement was signed by Azerbaijan, Georgia, Iran and Ukraine in Baku earlier this year, which makes the achievement all the greater a celebration, given the speed of the first trial transportations.

Where Next For The Region’s Rail Network?

Azerbaijan and Iran are now in negotiations about funding the construction of the next phase of rail track from Rasht-Astara;  this is key section of the western branch of the North-South corridor.

Gurbanov points out that a search for sources  of joint funding and construction of section Rasht-Astara will begin after the Astara bridge has been commissioned next month.  Financial aid to the Iranian side in this construction project  could involve a loan of up to $500 million.

The new year could see some exciting progress.